This year 11 teams have entered the cup competition and it will be a knock-out, run on the same lines as last year.

Clubs should submit their teams to Richard Smith by 5:00PM on the Friday before the match for handicapping to take place.

The handicaps will be sent in the usual way, NOT to be opened until the end of the match.

The coloured score sheet is the official one and needs to be returned to jean in the usual way.

The white ones is for your own use and needs to be shown to the home team before the game begins.

The final will be played week commencing March 25th.

Teams that have games to fit in should go ahead and fix them up as soon as possible.

The cost of the match courts and shuttles is to be shared equally between both teams.

The draw is shown below. 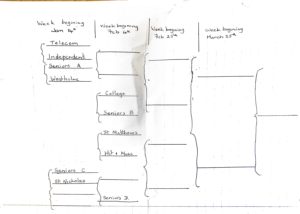