After their home fixture against their own C team, the current Division 2 leaders travelled to Westholme to face my B team. The practice court was up and it was great to see this used throughout the evening by those who had come to either support or practise.

In the men’s doubles, young Harry Singh, complete with his French GCSE homework (he sat himself down firmly next to my brother when he was off court!) was definitely up for the challenge. Playing first with Alex Pimperton and then with John Skinner, the Westholme men split both of their opening games against Tyler Allen and Steve Roe, and Tyler and Lewis Gregson. These close, well fought games were all played in a competitive spirit which was brilliant to see. On the adjacent court, the Westholme ladies had switched their positions slightly from the previous week, with Lucy Gallagher this time playing at number 3, first with her cousin, Jenn Trethewey, and then with our newest recruit, Caroline Lightfoot in only her second match in the league. The Seniors B ladies were: Amanda Hodkinson at 3 and Jane Tighe and Seniors B Captain, Helen Shanks. All of the ladies’ games were well played and the red faces were testimony to the quality of the rallies with the home team reaching double figures in all of the games.

In the mixed, Jenn and Alex at top  faced the experienced Jane Tighe and young Tyler Allen. Despite some lovely short serves from the Westholme lady, Jane’s tight cover on the net coupled with Tyler’s boundless energy all over the court eventually proved too much for the Westholme pairing. At number 2, the newly formed partnership of Caroline and John met Helen and Lewis. Both games were tight, 16 and 19; but both fell to the away team of Blackburn Seniors B. Extracting himself from his French homework – with another ‘I’ll be back’ to my brother – young Harry bounded on to the court with my niece, Lucy. Against the opposition of Amanda and Steve Roe, the Westholme couple played a thoughtful and tactical game, forcing their opposition to dig deep. Another entertaining match, this time saw Westholme winning both games. Spurred on by this victory, Alex and Jenn at number 1 then took a game off Helen and Lewis, before the number 2 Westholme pairing learnt the hard lesson that is Tyler Allen, succumbing to his might in both games.

The division leaders, then, won 13, 5, but not without a very spirited fight by their Westholme opposition. And the title of this report? Well, if I finished it off it might make a little more sense:

…why Blackburn Seniors B are in Division 2.

Many thanks to our supporters on the night: Lewis’s mum and sister (also doing GCSE homework), Amanda Singh, my brother (French assistant extraordinaire), Christopher Hodkinson, my sister, Cathy (especially for her adding up of the score sheet) and Stacey Gallagher…who might bring her kit next week, who knows! 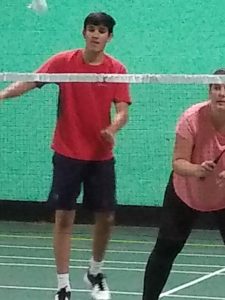 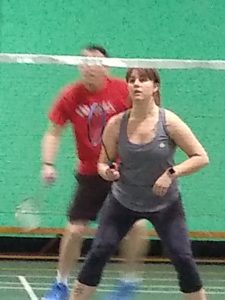