Fresh from his singles’ victory in Cumbria, we were relieved to have the ever energetic Graham Robinson confirm his availability for the fixture; coupled with our secret Aspinall weapon, aka Phil, maybe we were in with a chance!

The level doubles started well: Jenny Brookfield and yours truly took on that plucky left hander, Alison Leaver, and Aqsa Adam, winning the first game to 14 before narrowly losing the second to 17. On the adjacent court, Graham and Phil faced Mr Nonchalant himself, captain Keith Ashton, and the ever youthful Chris Hoyle. The home team battled hard with some exhausting rallies, before eventually succumbing to the Hit & Miss might. In the second ladies’ game, Jenny and Anne Robinson met Aqsa and Julie Bates. Again, there were some long and competitively played rallies; both of these games, however, went to the opposition. Without the Legend that is Finch (unfortunately this is going to be the theme for Westholme A’s season this year) we were lucky enough to see a rare sighting of a Manchester player in our league, Clint Gibbs, who partnered Phil against Chris and Abdul Malik. The Westholme gents were unfortunate not to sneak the first game, narrowly losing it to 19, before the away pairing went through the gears, to win both games.

The promising start seemed a long way away as we faced the mixed doubles’ games.

If badminton has taught me anything as I have grown older it is probably that, although I still hate losing (with a vengeance), I can still enjoy the games I lose. Playing at top mixed with Graham, we gave Keith and Alison a run for their money, losing 16 and 12 – although it felt much closer than that! Anne and Clint played at number 2, but found the power of Abdul and Julie very difficult to handle. The number 3 couple of Phil and Jenny then met Chris and Aqsa for the opposition. I don’t know whether this is an opportune moment to mention this – and I know it’s early days in the season – but Jenny hasn’t lost a mixed game yet. There was some excellent net play from young Aqsa and punishing cross court drives from Chris Hoyle, which really had the Westholme pair scurrying. In two competitive and close games, the home team came out on top, winning to 15 and 17. Clint and Anne put up a spirited fight against Keith and Alison, scoring vital points in their games as we tried desperately to add some bonus points to our score. In the final game of the night, the Westholme B team players who had turned out to practise on the spare courts, had all exhausted themselves so we had a bit of an audience for this last battle. Refreshed from his brief respite off court, I could see Graham’s batteries were well and truly recharged as he strode on to face Abdul and Julie. Although I have been practising my short serve all summer, my first flick serve to Abdul took him by surprise and we were up and running! This was probably my favourite game of mixed for a long time as I knew we were making Hit & Miss work for every point – well, Graham was anyway! Unable to stop himself at the end of one of the many long rallies, he executed a perfect double somersault on the adjacent court before scampering back on court for the next point! We may have lost (we did lose) but the 14 and 16 points we scored made the game feel much closer. If only I had remembered in time which way to position my feet for Abdul’s long centreline serving, who knows what could have happened.

So, all in all, it was a game of ‘If onlys…’ I am extremely proud of Westholme A who could not have worked harder but simply fell to better opposition. Thanks to Jenny who did the adding up and retained her unbeaten mixed record!  As there are no matches next week, Westholme courts are available for practice: there are four of them and I set them up from 7:30pm until 10pm. Please feel free to come down to practise with us next Monday if you want to (well, not free…we charge £2 #bargain) 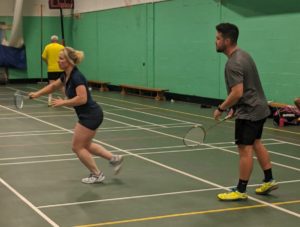 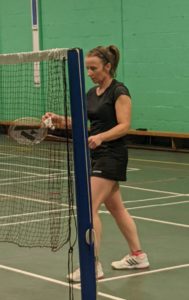 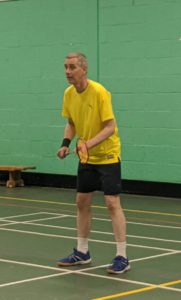