One of my very own

To a chorus of ‘not you again!’ I met up with the jovial St Matthews’ team and introduced myself to their number 3 lady, Veronica Brown, busy doing some crochet in between her games, before trying to stay impartial as I watched the away team, Westholme B, take them on.

The usual St Matthews’ men of Captain Brian Chappell, Stewart Hope and Hefin Parry, partnering Andrea Walmsley, Aliya Ayub and Veronica. For Westholme B, three new signings of Steve Roe (a welcome return from his ‘other life’ in France!), Clive Bass and the promising young star, Harry Singh, who played at number 3. Captain Sarah Avent led her ladies of Wendy Matthews, pretty in pink, and my very own Jenn Trethewey, who I am on strict instructions not to embarrass with baby photos or stories of racquets thrown in her carrycot, during this report. I will try my best.

In the level men’s doubles, Hefin’s cool head as he partnered Brian against Steve and Harry, quickly took control of the match. The Westholme pairing battled hard with some lovely fluent movement around the court from young Harry, but both games went to the home side. In the second men’s, however, between Stewart and Hefin and Harry and Clive, both games were neck and neck. Clive took some excellent net shots and Harry unleashed his overhead smash (see the photo!), resulting in the games being justly divided between the sides.

In the ladies’ doubles, Jenn played at number 3 with Sarah against Andrea and Veronica. Despite some excellent short serving from the Westholme number 3, the experienced partnership of the home side quickly asserted themselves upon this match. In the second ladies, however, Jenn partnered Wendy, against Aliya and Veronica, in a much more competitive game. Wendy’s back hand drop was used to good effect, as was Jenn’s attacking clear, and the rallies were well fought, at one point forcing the opposition to clash racquets and Veronica to run off court for a new racquet! Aliya’s well placed drop return and, again, the tactical experience of the St Matthews’ ladies eventually saw them win both games.

At top mixed, the two Captains faced each other, with Brian and Andrea for St Matthews, and Sarah and Steve for the away side. Sarah played some lovely attacking returns to the backhand corner, which Brian scampered, as always, to retrieve. The competitive attacking play from the St Matthews’ pairing saw them win both games. On the far court, Clive and Wendy faced Stewart and Aliya in what proved to be two very close matches. Wendy’s anticipation at the net was excellent and Clive covered the court like a young greyhound behind her, buoyed up by his victory in the men’s with Harry. A tense finale to the second game saw the match split between the two pairs. As the number three pairings knocked up for their mixed, it was clear that the Westholme couple, Harry and Jenn, were playing against very experienced opposition in Hefin and Veronica. A very positive attitude from both Westholme players made for some long, competitive rallies with Harry’s smash again being used to good effect. Jenn’s anticipation at the net grew in confidence as the match progressed and both young players learnt much from the game. In the final two matches, Brian and Andrea were pressed hard by Clive, making the most of his last game of the season before he flies out to Australia, and Wendy, who grew in to the game. The St Matthews’ number one mixed pairing eventually proved too much for the Westholme battlers. In the final match, Steve and Sarah, having discussed their tactics, were more than ready to face Stewart and Aliya. Steve made the most of the court with some lovely drop shots, forcing Stewart, glasses on or off, to go for his glasses in this last game. The number one pair for Westholme grew in confidence, winning both of these final games.

Remember, it’s tournament week all next week at Norden Sports Centre. If you haven’t entered (why not?) then it would be lovely to see you support those who have. All the games start at 7pm, with men’s and ladies’ singles on Tuesday 20th; level doubles on the Wednesday; and the mixed  doubles on the Thursday.

Safe journey back to Australia, Clive! 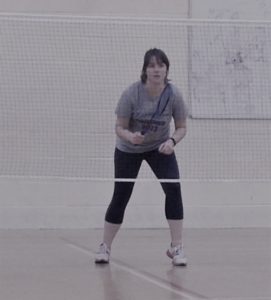 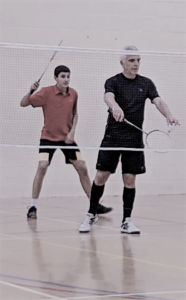 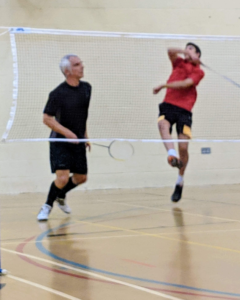