Norden Sports Centre was positively buzzing with this top of the table clash on two courts and a healthy number of club players practising on the adjacent courts, many of whom stopped to watch the fixture in between their games.

Celebrating the Legend’s 70th Birthday (well, what else is Graham Robinson going to do on his birthday?!) the Westholme team presented him with some homemade shortbread cookies which were then shared with the opposition – mainly Nathan Whitehead, but more of that later.

For Blackburn Seniors, Captain Rick Smith played at number 1, Matt Boyes at number 2 and Nathan Whitehead with the unenviable task of keeping up with Westholme’s Michael Finch at number 3. The home team ladies of Claire Edmundson, Joanna Holt and Jenny Woods, faced the away team’s Maxine Watson, Jenny Brookfield and Lucy Gallagher. As well as the birthday boy for Westholme, it was lovely to see the rarely spotted (well, together at least) Finches, namely father and son, Andy and Michael, who would be playing together for the very first time tonight.

In the opening level doubles, Jenny and Claire took on Lucy and Maxine in what was to be the first of many battles. Both games were close, a game a-piece, and all four ladies looked like they had had a good run around. More was to come! On the adjacent court, the Finch boys took on Rick and Nathan – once the later had been prised away from Graham’s shortbread biscuit. Another extremely entertaining game, the home pairing won both games to 19 and 18.

In the second ladies’ games, Jenny Woods partnered  Joanna for Blackburn Seniors against Lucy and Jenny Brookfield for Westholme. As with the first match, the ladies split their games, with Westholme narrowly losing 23, 21. The second men’s pairing of Matt and Nathan (once he’d had his shortbread fix) faced the birthday boy and young Michael, and, again, the home side were victorious, this time winning both games. The score was 6, 2 at the end of the level doubles.

There was hope, however: someone reported they had seen Rick wince during one of the long rallies and Nathan had completely finished off the birthday boy’s shortbread.

At top mixed, Rick and Claire faced Andy and Maxine in another gruelling marathon. The match was split, with the Westholme pair narrowly losing their game again to setting 24, 22. At number 2, Joanna and Matt proved too strong for Westholme’s Graham and Jenny, winning both games. With no shortbread to spur him on, Nathan, playing with Jenny, split both games against Michael and Lucy. As both ladies mopped their brows, they compared healthy complexions, relieved they had finished their matches for the night!

Andy and Maxine then faced the young duo, Matt and Joanna, and again split their games – 19, 21; 21, 19. As the final mixed game was about to be played, Rick’s limp had become more pronounced and he asked if a replacement could be chosen for his final game against Graham and Jenny. Unfortunately, at the prospect of yet another game, Nathan (whom the opposition had chosen!) realised the shortbread had run out and he would not be able to play without it! Undeterred, the plucky captain decided he would ride through the pain and play instead, winning both of the remaining games with Claire.

Although the final score was 13, 5 to Blackburn Seniors, all of the spectators (not just me!) will agree that the match was played in a fierce, friendly and fair way – as it should be. 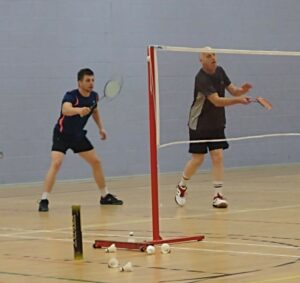 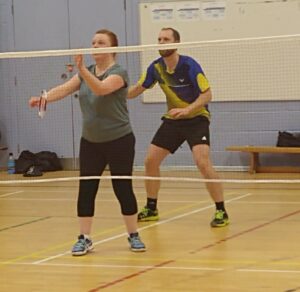 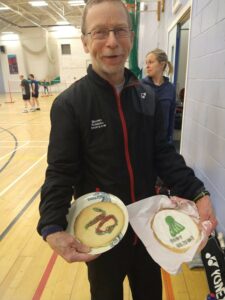