You wait ages and then two come along at once

This was a match between the Young Pretenders, aka Tyler Allen, Adam Ashraf, Luke Quigley, Emily Riley, Honey Edmundson and Helen Shanks, and the Legends, aka Mohammed Suleman, Graham Robinson, Andrew Finch, Lynne Hosegood, Maxine Watson and Jenny Brookfield. It was also a match in which I wore so many hats I got confused and fell over, right in the middle of my mixed game with Rick Smith. Captaining Westholme, writing a report on the match and yet somehow playing on the adjacent courts in a Rossendale game – yes, that is the power of the Smith charm!

First up, top men’s, Tyler and Luke faced the wily opposition of Andy and Sully. We won’t talk ages because that would be rude, so I’ll just leave it at that. Fortunately, though, experience does count for something. The opening men’s games were very close and were split between the two sides. Tyler impressed the opposition with his court coverage and competitive attitude. He is a young player who is just getting better and better with each season. The two Westholme legends, Andy and Graham Robinson, then took on Luke and Adam, under the watchful eye of Adam’s mum on the bench. What a battle! At one point, Andy shouted his usual ‘dive’ (I’ve heard this instruction often in my mixed with him and just ignored it, for obvious reasons) to Graham, and then retrieved the shuttle himself anyway. From my vantage point on the adjacent courts, it was great to see such a well fought and competitive match between two very different generations of players.

In the ladies’ games, Captain, Helen Shanks, partnered Emily against Lynne and Jenny Brookfield. Two very close games – 17 and 18 – eventually fell to the away team, both played in friendly rivalry. Lynne’s tight close serve was used to good effect and Emily’s retrieval skills occasionally belied belief. Next up, Helen and Honey, the youngest player there on the night at just 14 years of age (I said I wasn’t going to talk ages, but there were two men playing for Seniors’ B, both of whom were just 15!) faced the experienced partnership of Maxine and Jenny. Another pair of close games, this time 16 and 17, saw the home pairing covering the court well, with young Honey particularly impressive for her court awareness. Eventually, however, the away ladies came out victorious.

At top mixed, Tyler and Emily faced Sully and Lynne. After another very close opening game of 18, the Westholme pairing took charge in the second game to win both against their young opposition. Next up, Adam and Honey took on Graham and Maxine for Westholme. Never was the age difference between the two teams more obvious and more closely fought over than in this exhausting match! Losing the first battle, the Seniors’ youngsters were desperate to make amends in the second game which they won to setting. Already a force to be reckoned with, what will these two young players be like when they communicate to one another on court! Having just about recovered from his men’s doubles (but knowing he’d be paying for it in the morning), Andy Finch partnered Jenny against Luke and Helen for Seniors B. It was during this game that I was overcome with the hats I was trying to wear on the night and momentarily found myself on the floor (I still have the bruises to prove it!): this did not, however, halt the progress of the Finch machine as he quietly signalled me to ‘get up’ half way through one of his rallies. Eventually tying Jenny to the net, or thereabouts, the Westholme pair won both games. The penultimate game on the night, between Tyler and Emily and Graham and Maxine, saw another closely fought game, with Tyler definitely putting the veteran Robinson through his paces. Experience, as I’ve said, counts for something and saw the Westholme pair victorious in both games. The final match was between young Adam and Honey and Sully and Lynne. The old school front and back format, coupled with Sully’s intelligent cross court shots, stretched the young Seniors’ pairing, bringing both games to the away team.

All in all, then, despite the actual score in games, this fixture was an extremely close and well fought match. As the Young Pretenders went home to finish their homework, the Legends headed back for a soak in some Epsom salts and to order some of Mr Hot Stuff Bythell’s magic lotion! 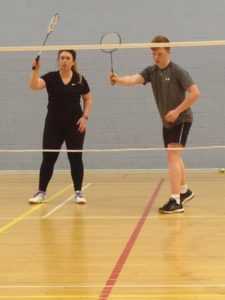 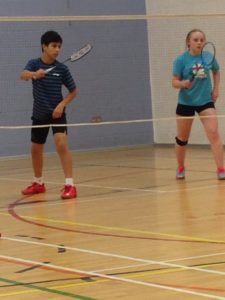