Snow has fallen, snow on snow (and then there’s the ice underneath)

It was a freezing cold night and not easy to leave the warmth of my log burner, but I prised myself away to report on the match between Goodshaw and Caprica at Haslingden Adrenaline Centre. I’d played the previous night in Southport in a one court church hall, so the warmth of the sports centre was positively luxurious!

The match got underway with Gary and Alex facing the two Chris’s for Caprica. Amidst talk of a desire to just get to double figures, the home side opened up in style winning both games. Gary’s dominance on court and wily service action pushed the Caprica pairing hard in these two close, opening games. Proudly using his Blackburn & District pen, Nigel quickly got his team’s scores on to the sheet before partnering Alex against the man in black, Jonny, and Chris T. This was another enjoyable and very closely fought game, with setting in the first, so definitely double figures for the smiley Captain of Goodshaw.

In the ladies’ doubles, resplendent in her Bolan t-shirt, Kath and Lisa for the home team, took on Laura, aka Mrs, and Rosie. Wearing her tracksuit leggings (yes, it was that cold!) there had been rumours of Laura’s hubby, aka Mr, turning up for his lift just in his shorts. Winters are hard in Colne!

Despite a brave battle, the Caprica ladies proved too strong for the home side. Next up, Val and Lisa faced Rosie, this time partnering Captain Sue. Val’s backhand cross court shots were used to good effect, as was her ability to spot the gaps on court. The steadfast front and back format of the away pairing, however, soon had the game under their control, and both games fell to Caprica.

In the breathing space between the doubles and the mixed games, there were stories of Nigel being wedged in to the back of Kath’s bmw with his trophies and singing ‘I Will Survive’. Needless to say, if the Blackburn and District Presentation Night involves a karaoke, Goodshaw already have their group entry ready! At top mixed, the serious stuff of Gary and Kath played against the ever smiling Mrs and her Mr. Both games were close, the first to setting, with Gary’s strong wrist action and cross court drives pushing the away pairing to the limit. As the two Captains went on to face each other, partnering Val for Goodshaw, and the man in black, Jonny, for Caprica, the fixture remained at 2,6. Scampering here, there and everywhere on court, only momentarily resting his hands on his knees at the back of the court (I was lucky enough to catch the typical Holt stance: see photo gallery) Nigel and his partner fought hard against the Caprica pairing. Val’s attacking backhand and cross court shots again proved most effective, although Sue’s delicate reading of the net and excellent anticipation were hard to beat. Somebody gently nudged Rosie on court as she partnered Chris T at number 3 against Lisa and Alex. There were times in these games that Chris looked surprised to see Rosie behind him. The home couple took advantage of the level doubles’ format, however, and almost sneaked the first game when it went to setting. Gary and Kath were next up against Jonny and Sue. Acclimatising themselves to the deceptive service returns from the home gent, the Caprica pair had to work hard against the experienced Goodshaw partnership. In the final game on the night, Nigel and Val played against Mr and Mrs in what were two very close, neck and neck games. The excitement of winning the first game seemed to go to Captain Nigel’s head and his team had to inform him that the match was not over as he’d thought; he still had one more game to play! Mrs very much took control in this final game with an excellent display of centre line long serving which really stretched the opposition.

It was good to hear of the excellent coaching going on by Goodshaw, run by Nigel and Kath, encouraging youngsters in to our lovely sport. The experience these young players are having by entering the Sunday tournaments organised by Rick Smith, cannot be underestimated. So where oh where, you wonder, was Mr Hot Stuff Blythell on this cold, cold night? Captain Sue was quick to point out to me at the start of the match that ‘Hot Stuff is missing’, just before she popped in to the cupboard to put her skirt on! Yes, it was that sort of a night! 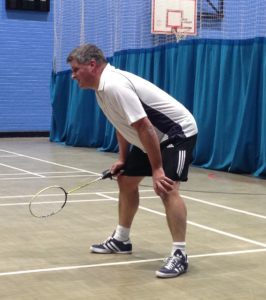 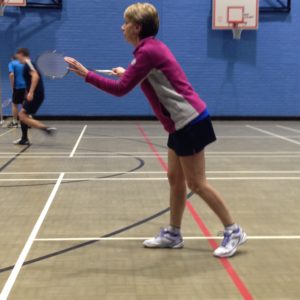 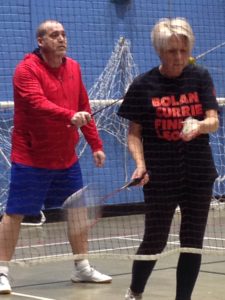 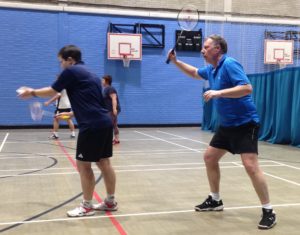