It can’t be very often that two couples not only partner each other, but then end up playing the opposition couple – anyway, I felt it was worthy of another roving report!

In the first ladies, the first Mrs., Selina Walton, partnering Joanne Egan for St Nicholas, played against the second Mrs., Anne Robinson, playing with yours truly. Anne’s long serve came in to its own in games which were evenly fought. As the match progressed, the home team ladies grew in confidence, with the opening level doubles fairly split, one game a-piece. On the adjacent court, one of Westholme’s many new signings for the season, Jason Lim, had long looked forward to playing with the legend himself, Graham Robinson. The Westholme men took on Mohammed Aslam and Gary Walton, in another entertaining set of games. The away team’s court coverage, however, proved too much for the home side and the Westholme gents won both games.

The second ladies saw a welcome return to our courts for Pam Kirkham. A founder member of Whitehall Badminton Club in 1980 and former captain of the club, Pam made contact with Westholme over the covid break and has been attending our Monday practices. This, however, would be her first game for us. We had the pleasure of playing against Joanne, with Carole Eldon for St Nicholas, and it really was a pleasure. Everyone played to the best of their ability, and there was mutual respect for each other’s shots and points won. It was a most enjoyable match, which the Westholme ladies won. After I’d got over the shock of Pam’s red hands and she’d realised a new grip was perhaps in order, we got ready for the mixed doubles.

The second men’s game saw Mohammed and the bouncy Matt Honey (still not wearing protective knee pads) against Westholme’s Paul Hooper and Jason. The St Nicholas men battled hard in both games but just lost out to 17 and 18, giving the away team a 7,1 advantage going in to the mixed.

It was at top mixed, that the two Mr. and Mrs. couples faced each other: with Selina and Gary Walton playing against Westholme’s Anne and Graham Robinson. Another enjoyable game played in the right spirit (I feel like I could say this throughout this report!) the experience of the away couple and the busy scampering of young Robinson around the court proved hard to handle, and Westholme won both games.

Playing with Paul, Pam faced Carole and Matt at number 2 mixed. Some excellent smashes from Matt (when he wasn’t diving on the floor!) and brilliant retrieval skills from Westholme’s Paul Hooper, produced another very entertaining game to watch. The home team came out victorious in both games, winning 18 and 14.

Jason carried me through in my mixed at number 3 against St Nicholas’s Joanne and Mohammed where we won both games. Mohammed used his height well to get great depth on his smashes, but Jason’s quick feet around the court and tactical awareness eventually wore down the home couple.

Graham and Anne continued to forge ahead in their second mixed game, this time against Matt and Carole. The fitness levels of young Robinson seem to know no bounds: there was a whisper of something laced in his delicious birthday cake which Anne handed round to both teams at the end of the match, perhaps that is what keeps him so young?

In the final game, Westholme’s Pam and Paul played Selina and Gary Walton in yet another tightly battled game, again enjoyable to watch. Two very evenly balanced couples on the night, this match was rightly split one game a-piece, 21,18 and 19, 21 – couldn’t be much closer.

As Captain Yvonne Kay totted up the scores on the doors, we all appreciated a match well played and well fought as we munched through Graham’s delicious birthday cake, in the hope that, if it was laced with anything that would rejuvenate, it would rub off on us too. 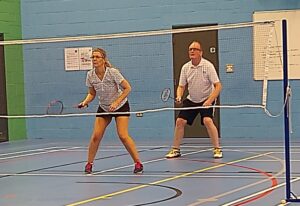 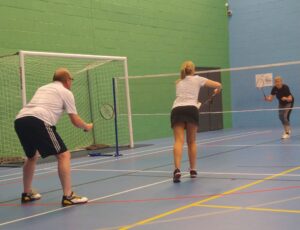 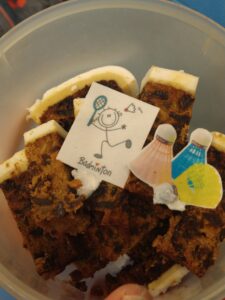 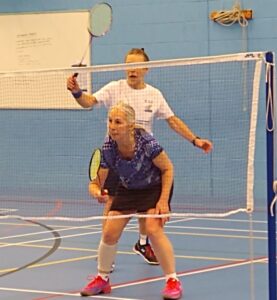