It was lovely to see Norden Sports Centre so busy as the youngsters training with Blackburn Seniors finished their coaching session and two of the Seniors’ sides – the A and the C – started their home matches. The regular ladies of Captain, Mel Rushton, smiley Ann Masterson (appropriately dressed in purple batwing head gear) and the promising Ciara Hichen partnered Stewart Holt, Joe Lambert and young Lewis Gregson. They faced the experienced side of Brian Chappell, Stewart Hope (whose big decisions on the night were whether to play with or without his glasses, and who actually owned the red shirt he was wearing!) and Hefin Parry; with ladies of Andrea Walmsley, Aliya Ayub and Karen Rogan.

Once Elaine Smith for Blackburn Seniors had found her cushion and the dubious bottle of spiced gin was passed around under the bench (watch out for this as a raffle prize at the Presentation Night!) the match was quickly  underway. The opening men’s doubles between Brian and Hefin for the away team and Stewart and Joe for Seniors was an extremely close battle, going to setting in the second game. Brian’s quick attacking play and Hefin’s cool control on court eventually saw both games going to St Matthews. On the adjacent court, however, young Ciara displayed her confident short serves to excellent effect as she partnered Mel against Andrea and Karen for the away team. Despite brilliant retrieval from the St Matthews’ ladies, the home side won both games and the match drew level. Another close first game in the second men’s doubles between Stewart and Hefin and young Lewis and Joe saw some calm defensive play from Hefin, along with superb short serving from his partner, Stewart. Although Joe’s strong centre line smashes made it difficult for the away pairing, eventually both games fell to St Matthews. In the ladies’ game, Ann had taken off her bat ears as she partnered Ciara against Aliya and Karen. Again, some excellent court coverage from Karen and great anticipation at the net from her partner, Aliya, made for a gripping game, which was neck and neck throughout. Quite fittingly, this match was split between the couples, meaning the away team went in to the mixed with a 5 games to 3 lead.

At top mixed, Stewart and Mel faced Brian and Andrea, with Lewis and Ann at number 2 against Stewart and Aliya. Brian’s determination to attack the shuttle, coupled with some agile blocks at the net from Andrea, brought the away team their first mixed games. A very close battle at number 2, resulted in setting in the second game as Lewis and Ann fought for every point. Aliya’s reach at the net and some clever centre line serving from Stewart eventually saw St Matthews win both games. In the number 3 mixed, Ciara and Joe faced the experienced pairing of Hefin and Karen who quickly asserted control of both games.

As the top mixed pairings turned around, Seniors split the game between Mel and Stewart and St Matthews’ Stewart and Aliya. In the final game between Lewis and Ann and Brian and Andrea, the match may already have been won by the opposition but the game was definitely not over. Another very close battle saw Lewis dive to retrieve the shuttle as Brian pulled off the shot of the night with a delightful straight backhand drive which clipped the net.

So, all in all a close and well fought match with lots of back court banter and support. Well played to both teams! 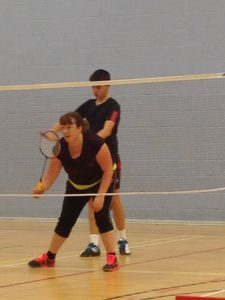 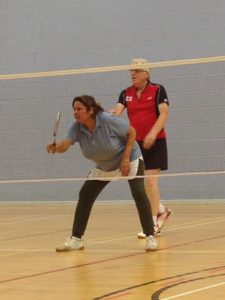 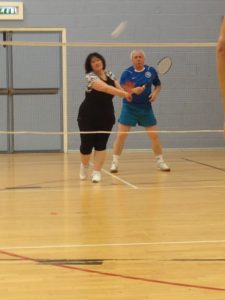