The future is bright

The thought of somebody missing the roving reports spurred me on to write another, especially as the venue was so close to home. I was glad I did.

I’d already been forewarned by Goodshaw’s ever smiling Captain, the gregarious Nigel Holt, to bring my flash with me if I was taking any pictures: as the away team ambled in, Judith Hamilton wondered whether wearing a miner’s helmet on court might be a good idea. It was rather shady in places!

Once Goodshaw realised I hadn’t turned up thinking it was a Rossendale match but was writing a report on the fixture, they were all on their best behaviour. Alex and David came off court after their men’s saying they’d felt the pressure of me there and that was the best they’d ever played. I hadn’t the heart to tell them my attention had been on the ladies’ game next to them.

And here is the reason for the report’s ‘The future is bright’ title. Stuart Davey’s 14 year old daughter, Freya, was playing for this much supplemented Independents B side. Like I said, I was glad I’d made the effort to come out and report on this fixture.

The home side was unchanged: Captain, Val Bertenshaw, at number one, with Kath Gillam and Lisa Archer; David and Nigel Holt at 1 and 2 respectively, with Alex Hinton playing at number 3. The Independents B side, however, were almost unrecognisable from the team I had seen earlier in the season. It was lovely to see Sue Hirons, the Captain of Caprica, back playing in our league (and promising Caprica would return next season – I’m going to hold you to that, Sue); at number 2, Judith Hamilton, formerly Blackburn Telecom, and the promising junior, Freya Davey, at number 3. The away team’s men were made up of Dave and Rhys Holt, also formerly of Blackburn Telecom, and Julian Silverwood, who played at number 1.

In the opening doubles, David and Alex faced Julian and Rhys. As Alex reported, it was one of their best ever games – and I believe him: unfortunately, I focused on the ladies’ game where Val and Lisa met Sue and Freya. The ladies were very evenly matched: Val’s trademark backhand cross court came in very handy, as did the feisty Lisa’s drop shots and cross court clears. What was so lovely to see, however, was the tactical understanding between Sue and young Freya. Sue’s clever positioning on court and Freya’s excellent short serves and strong smashes, brought victory for the away team in both games, and produced a massive smile on the watchful face of Dad, Stuart. After the opening doubles, it was neck and neck as David and Alex had got both of their games against Julian and Rhys.

In the second level doubles, Kath partnered Lisa for Goodshaw, and the experienced Judith Hamilton played with Freya for Independents B. Again, the excellent tactics and court coverage of the away ladies proved too much for the Goodshaw pairing, who battled hard throughout but were always playing catch up. Another win for Freya and an even bigger smile on Dad’s face! The final men’s game saw a great battle between Nigel and Alex, and the father and son duo, Dave and Rhys Holt. It’s not often you get two players with the same name in a match, which is why the Goodshaw Holt is David and the Independents Holt is Dave – otherwise I’d get confused! The men split their games meaning the fixture was very finely balanced at 3,5 as we went in to the mixed.

The top mixed produced a veritable marathon between Val and David, and Sue and Julian. The two couples battled for every point, Julian frequently flying through the air (as can be seen in my action shot!) and David racing himself ragged around the court. The first game went to the home side; by the skin of their teeth the away couple then took the second game – 25, 27. I’ve heard rumours of a ladies’ game between Blackburn Seniors B and Accy Flyers B going to 28, 30 (the Accy Flyers’ ladies were still reeling from it when we played them the week after!) so the 25, 27 isn’t quite in their league but, even so, it’s a fair score. At number 2, the experienced pairings of Kath and Nigel for Goodshaw, and Dave and Judith for Independents B, proved to be an equally entertaining game. Judith’s deceptive down the line long serve came in to its own in another battle which was fairly split, one game all. The number 3 Goodshaw partnership of Lisa and Alex were next up against Rhys and Freya. The determination of the Goodshaw couple saw them victorious in the first game, making the fixture a nail-biting 6,7. Rhys and Freya, however, won through in the second game, with a magnificent smash by Freya to seal the game 21, 18. In the final two mixed games, Kath and Nigel again split their games this time to Sue and Julian, winning 23, 21: as did Val and David against Dave and Judith – losing to 11 before winning to 19.

The fixture could not have been much closer. Independents B won by 10 games to 8, with both teams getting the 4 bonus points. When the aces were totted up, there were just 8 points in it!

Once the photos I had taken had been approved by both teams, and Lisa’s delicious malt loaf with its secret ingredient had been eaten (yes, here’s another team who makes cake!) I set off for home happy in the knowledge that, as the heading says, the future is badminton is bright…as long as we all keep on having children and bringing them in to the sport we love!

Well played to both teams. 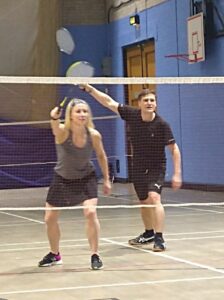 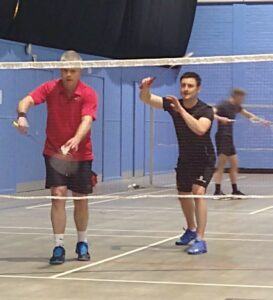 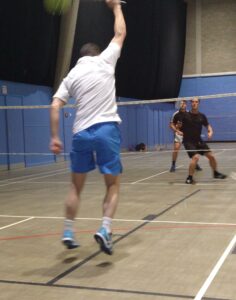 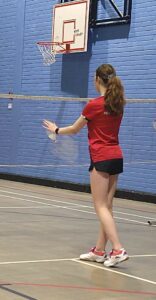