What a difference a Finch makes

Finding out at tea-time that my number 1 lady could no longer play because of a stomach upset was not something I was expecting, but, hey ho, I was down at the practice anyway so I might as well play. Moving all the ladies up one, I muttered a hasty ‘I hope you’re all ready to carry me’, before getting the underway.

The ladies’ pairings of Maxine Watson and Lucy Gallagher for Westholme and Jane Mackey and Karen Lamb for Independents were first up. Excellent net play and strong smashes from the opposition made for a really entertaining game, with all four ladies playing some excellent badminton. Revenge for their loss in the opening match of the season, however, pushed the Westholme ladies to take both games. On the adjacent court, the wonderful sight of the master himself, Graham Robinson, fresh from his National success (silver medal in the O65s men’s) playing with his youthful protégé, Aiden Sui, as they faced the indomitable duo of President Pete Wright and Stuart Davey. To say this game was neck and neck would be an understatement; even those watching it were out of breath! The Westholme men narrowly lost the first game to setting, before securing a win in their second game.

In the next ladies’ game, Lucy was under strict instructions to carry her auntie as we faced Gill Fourie and Karen Lamb. Fortunately, I benefitted from Lucy’s powerful smashes as I hid at the net, occasionally popping up to take a shot or two. Again, two very entertaining games of competitive badminton, with all four ladies at full stretch, eventually saw the home side win both games.

Finally, the second men’s couple of young Aiden and the Legend himself, Andy Finch, faced Hot Stuff, aka Ian Bythell, and Stuart. It was lovely to see Andy and Aiden finally play together: the wait was almost worthwhile. The opposition’s clever net play and delicate disguised shots resulted in Independents winning the first game, again to setting. In the second men’s, however, Andy and Aiden held on to their lead, winning it 21,18. Aiden was positively beaming!

After chocolate rolls and vimto (yes, we serve refreshments now!), the top mixed pairing of Graham and Maxine faced the newly formed partnership of Jane and Pete. This was an excellent, close battle with the away team narrowly losing out to setting in the first game before clinching the second 21,16. In the second mixed pairing, another new partnership for Independents, Ian and Gill, faced…well, I don’t like to think how many years I have played mixed with Andy – let’s just say, more than half my lifetime (and his!) During our game, it was noted by more than just me that I obviously stand in the wrong place on court as I seem to frequently get hit by my own partner, even when he is simply passing the shuttle back to the opposition. That aside, I thoroughly enjoyed both games, played in great spirit and with friendly banter – exactly how league badminton should be.

The number three pairings of Aiden and Lucy, and Stuart and Karen, then faced each other. It was nice to discover that Stuart had already come across Aiden at the coaching he takes his daughter to – he has promised to bring her down to practise with us when we get back in to Westholme after the break for examinations. Two excellent, close games were fought over by these couples, with the home side coming out victorious – 21,19; 21, 15. Aiden was definitely beaming!

The top mixed pairing of Max and Graham split their games with Ian and Gill, winning the first 21,12 before succumbing 15, 21. In the final match on court I decided to stop hiding at the net as me and Andy faced Jane and Pete. I lost count of the number of long rallies and punishing smashes in these two games but they certainly kept me on my toes. Fortunately, the Legend pulled me through and we completed the match by winning both games to 17. 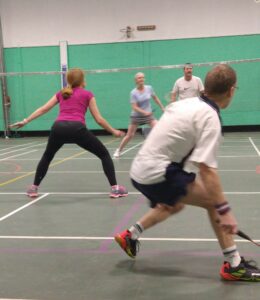 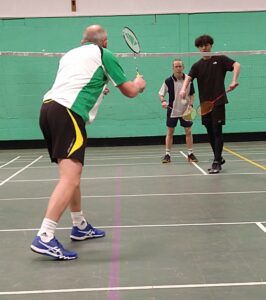