This top of the table clash between one of Rick Smith’s teams, Seniors A, and Caprica, captained as always by the irreplaceable Sue Hirons, promised to be an excellent fixture. For Seniors A, there was the man himself, along with Nathan Whitehead and Paul Ainger, aka Zinger, with Joanna Holt and Claire Edmundson ably assisted by the super sub, Honey Edmundson who had stepped in last minute. Sue’s Caprica squad consisted of Chris and Laura Whitwell, at top mixed; the handy left hander, David Bradley and Rosie Southworth at number 3; and Mr hot stuff Bythell and his little red tub at number 2 with Sue.

The men’s doubles quickly got underway with Nathan and Zinger facing Chris and David. Determined to dominate at the net, Zinger’s play forced the lifts which his partner, Nathan, was glad to put away. Go fast Zinger then partnered the man himself, Rick, against David and Ian. Even with his rather fetching blue stripe on one leg, the home team were again quick to assert their control of these opening games.

On the adjacent court, however, the ladies’ games went down to the wire in both matches. First up and coping well with the responsibility of Vice-Captain for Seniors, Joanna and super sub, Honey, played against Laura and Rosie. The rallies were long and the court coverage phenomenal from all four players – I was exhausted just watching! Setting in both games, it was fair that this match was split between the two sides. The second ladies’ game got off to a very entertaining start with a near miss collision between mother and daughter when Claire wandered in to Honey’s swing! The Caprica ladies of Sue and Rosie met the Edmundson duo point for point, however, in another closely drawn set of matches.

At top mixed, Nathan and Jo for Seniors A faced Mr and Mrs, Chris and Laura, from Caprica. Despite some lovely backhand drives from Chris in to the tramlines and excellent centre line serves from Laura, the Seniors’ partnership proved too strong for the away couple. In the second mixed game, the two Captains faced each other, Rick playing Claire, and Sue with Ian. These were nail biting games which literally swung point by point between the two sides. The Caprica pairing produced some beautifully deceptive shots and the Seniors’ couple were pushed right to the limit in both games. At number 3, super sub Honey, not content with almost knocking her mother over, carried a now blistered Zinger in the mixed. She served with great consistency and accuracy against David and Rosie and was fearless in her approach. In the penultimate match, Nathan and Jo pushed Sue and Ian hard, forcing a dive from the Caprica man. Unfortunately, this resulted in an injury which meant the second game had to be conceded. As Rick and Claire went on in the final match against Mr and Mrs, Seniors A continued to pile the pressure on to their opposition despite some excellent retrieval and court coverage from both Caprica players.

At the end of the game it was discovered that the Vice Captain’s role had in fact weighed heavy on Jo’s shoulders as scores were suddenly remembered and frantically added to the score sheet. The match had been played with good humour and friendly competitiveness and enjoyed by all who watched it. One more fixture next week before we all rest for Christmas – and then the joys of the handicapped Cup competition to look forward to in January. 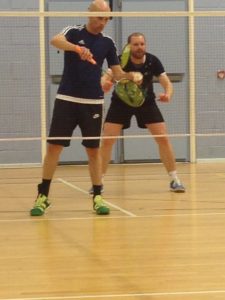 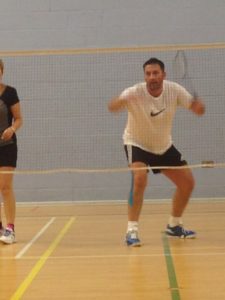 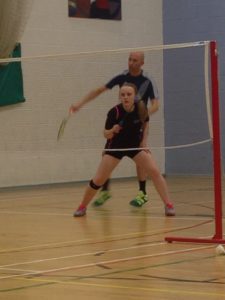 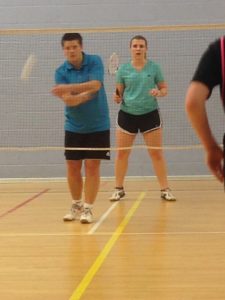