After a sudden change of venue (I think this could become a habit this season!) St Nicholas welcomed Westholme B to their new home courts at Accrington Academy.

The Times Cup winners of 2018 were largely unchanged with Louise Bernard, Carole Eldon (replacing the injured captain, Yvonne Kay) and Lynne Hustler; and Gary Walton, Matt Honey and Mohammed Aslam. Their opponents, however, were a much altered Westholme B side of: Claire Banfield, Jenn Trethewey, Rachel Robertson; Chris Ball, Paul Hooper and Callum Briggs.

Having quickly established that Jenn had just completed a day’s first aid training, Chris volunteered to be first in line for any CPR going. The floor antics of Matt Honey, however, were more than enough to have us all nervously waiting in the wings as he literally threw himself from pillar to post!

Despite getting double figures in all the games and several ‘almost there scores’ in the opening level doubles, the home team proved far too strong for Westholme B who went in to the mixed with a mountain to climb. Resolving to make good in the mixed doubles, Claire and Chris faced the top pairing of Lynne and Gary. After a nail-biting game which the home side won to setting, the Westholme couple served through (well, Chris did) to finally win their first game – 21, 5. Phew!

Working hard on the adjacent court, the two new recruits, Rachel and Callum, did themselves proud at 13 and 13, showing much promise in their determination and grit, as can be seen in the accompanying photographs. Using her flick serve to good effect, Jenn and Paul took a much needed second game from the top pairing for St Nicholas, despite losing both games to the smashing policeman, Matt, and his partner, Carol. In the final mixed, Chris and Claire decided to try to defend that formidable smash, and squeezed out another split result.

From the side lines, Yvonne continued to captain and run this long-standing club. A rotary cuff, torn tendons and six pins in her shoulder may stop her from swinging bin bags around but will certainly not see this recently retired player give up the sport she loves – and, now she knows about the Blackburn & District Facebook page, she can join in with the #throwbackthursday photos!

The learning curve will be a steep one, but I am sure Westholme B will get there in the end: after all, nothing worth having comes easy. 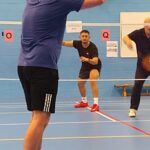