To say I wasn’t looking forward to this fixture would be an understatement. Knowing the Legend was away in a castle somewhere on Anglesey, however, I had drafted in my Big Guns, Phil Aspinall, and quietly breathed a sigh of relief. That sigh quickly turned to panic breathing when, late Sunday night, I learned that my number one man, Mohammed Suleman, had hurt his knee and would have to pull out of the fixture. Frantically trying to remember whether a B team player could play up and then also fulfil their own fixture, I failed and sought reassurance from my big sister who knows everything. Young Harry Singh, then, stepped up to the breach. His first season in the Blackburn league, and I was putting him in to the A team for a debut against the champions. What was I thinking?

First to arrive for the Hit & Miss champions was Nick Hodgson with mum, Val. As Keith filled in the score sheet, I thanked my lucky stars that, playing at number 3 as he was, I had somehow managed to avoid playing against this super star. I would leave that to my Big Guns, Phil, who I’d also placed at number 3.

First up, Phil and Graham Robinson played Abdul Malik and Nick Hodgson. This was a real battle, with Phil almost having to jump over his partner at one point when Graham lost his footing. Hit & Miss gents won the first game, but Westholme battled hard in the second, taking it 21, 19. On the adjacent court, a similar battle was going on with the ladies where Jenny Brookfield and Maxine Watson played Julie Bates and Jenny Stoddard. Narrowly losing the first game to 16, the home pairing pulled out all the stops in the second, winning it with two magnificent net topples by Maxine. She came off positively beaming.

We were half way through the level doubles, and the match was drawn! I hadn’t seen this coming.

Next up, young Harry and his not so old former PE teacher, Phil, played Nick and Mr Nonchalance himself, Keith Ashton. The Westholme men played extremely well, scoring 17 and 16, well up on the double figures Harry had set himself as a target. Harry attacked the shuttle well and moved fluently round the court, gaining much from the experience of playing at this higher level. On the next court, I, too, was having a battle of my own with Jenny, as we faced Jenny Stoddard and the might that is Alison Leaver – yes the tricky left hander is injury free and boy didn’t we know it. After a promising start, the first game just ran away from us as Jenny’s tight short serves forced a lift, often on to Alison’s forehand when we forgot she was left handed, resulting in the end of the rally. We lost to 6 points. Undeterred, however, and convinced we could play better, if only to remember not to put it up to Alison’s forehand, we switched over sides, dusted ourselves down and started afresh. The second game was neck and neck throughout with some excellent rallies played. Even Val and Ashley (yes, the roving reporter’s very own fan had turned up to spectate!) admitted it had been enjoyable to watch. Having put the nets up herself, it was fitting that the winning point was yet another trickle over the net shot by yours truly, and Westholme had won their third game of the night.

In the mixed doubles, the champions proved just how powerful they are, inexorably moving in to a 9, 3 victory before top and second mixed pairings of Graham and Maxine, and Harry and myself, had barely blinked an eye! Fortunately, we then had the clash of the titans to enjoy: Nick and Jenny for Hit & Miss, and Westholme’s very own Big Guns and Jenny Brookfield. The first game went to the away team, winning it to 15. The home pairing dug deep, however, and took the nail biting second game to setting, winning it 24,22, much to the delight of all of the spectators. Harry got his double figures in three out of four of his mixed with me, even against the mighty Abdul Malik and Julie Bates, who I know he wasn’t looking forward to playing after his experience in the handicap tournament.

This was a friendly and yet fiercely competitive match played in great spirit. It was brilliant to see so many spectators down watching, particularly Harry’s Dad, who could see how much his son had gained from the experience. As Phil hobbled off to nurse his aching muscles, Mr Singh was quick to get his number for some 1:1 coaching for young Harry over the summer – this would keep him away from pesky cricket, his other sport. Oh, and there’s a rumour going around that Nick’s dad, Barry Hodgson, is back playing in the Midlancs league. Next season, let’s get him back playing where he belongs, shall we? 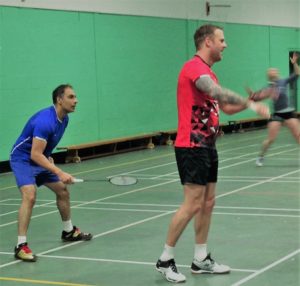