I miss those days!

Once the mix up of J.Alfred Prufrock was sorted out in Goodshaw’s whatsapp group, the match got underway. On the adjacent courts the other father and son Holt duo, namely David and Rhys, manfully played singles all night on their Independent club courts.

First up, David Holt and Michael Ormerod for Goodshaw faced young Jack Fenwick and Joe Lambert for Seniors C. Although he has been playing for four years, Jack is still only 14 years old. His backhand grip proved very useful in the battles he had against the more experienced men, although he had promised me to work on his forehand grip too! At one point in the match, young Jack’s racquet cracked and he had to run off to borrow one of his partner’s spares! The Goodshaw men, however, served well, often forcing a lift which was then difficult to defend. In the second men’s doubles, Michael, this time partnering captain, Nigel, met Jack and Jamie Blackburn. I think having a name which begins with a ‘J’ must be a secret Seniors C ploy maybe? Another entertaining game, particularly when a flick over Michael’s head saw him simply duck and shout ‘Yours, Nigel!’ – who promptly came scurrying from the other side of the court to retrieve it. This game also saw the shot of the night: a retrieval of Jamie’s smash which somehow Nigel extricated from his body to return it trickling over the net. Nobody could quite believe it!

Special mention in the ladies’ doubles must go to Sophie Lambert (sister of Joe) who stepped in at the last minute to replace a fellow player who came down unwell. We all need players like this, so well done, Sophie! Captain Mel was first up with Sophie (aka the ladies in black) against the experienced Kath Riley and Lisa Archer. This was a very amicable game played in the best of spirits with much laughter and enjoyment. Kath’s perceptive drop shot to the net proved difficult to read, despite the efforts of both Seniors C ladies. Next up, Sophie played with Becca Grimshaw, against the sprightly Karen Rogan and the formidable Lisa. I don’t often (in fact I probably never have) pick out a player of the match…but if I were to, it would definitely be Becca. She positively danced at that net, always on her toes and always ready for the next shot.

As the mixed doubles beckoned, both teams knew they were neck and neck – well, they didn’t ‘know’ it (the handicap was sent in a text to the captain at the end of the match…gone are the days of opening the envelope. I miss those days!)

Mel was ready to serve, so once Karen had been pulled away from our interesting conversation about The Horse & Bamboo’s open deck vinyl night on Friday, the opening battle between Nigel and Karen, and Mel and Joe could commence. It’s always a good game when two captains play one another, especially when one of them stands in the right position for the other one’s canny cross court shots! On the adjacent court, Becca and Jamie faced the mighty smash of David playing with Kath. I know Becca wasn’t looking forward to this game having sat with her just before and hearing her tactics of duck or get black eyes. When they came off, having got double figures in both games (and no ducking or black eyes!) the Seniors C pairing were beaming! Their mixed game against Nigel and Karen, was played with the same enthusiasm and determination. Those nifty cross courts were lunged after and stretched for in another friendly and enjoyable game which left Becca very ‘warm’!

As the games drew to a close and the captains carefully added up the scores before Nigel opened his text with the handicap from President Pete, both teams knew they had done their best – and that, after all, is what matters most. It was a shame there were only two spectators (me and my brother, David) – unless you count the brave Holt duo who did momentarily draw breath from their singles to watch the action – as it was a really good night of badminton, well played.

When the handicap had been added on, the youngsters of Seniors C had won by just 24 (and a half!) aces. Playing their first league games last night were Jack Fenwick and Sophie Lambert: the first, I’m sure, of many more to come. 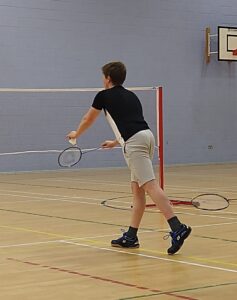 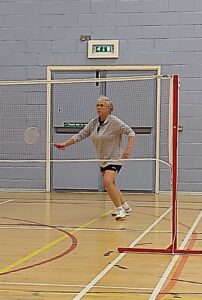 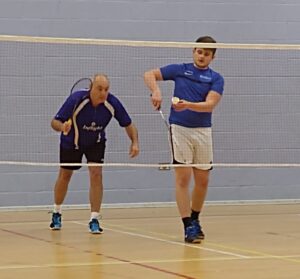 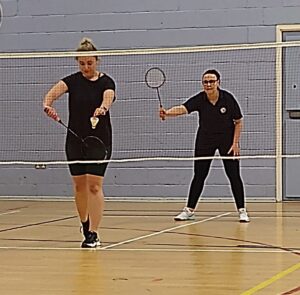 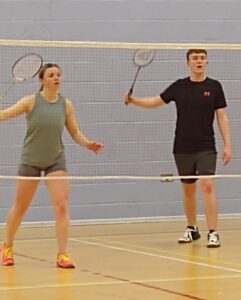