The evening didn’t start off well with some rubbish yet  amazing news from Harry’s mum: he has been accepted in to the Lancashire Cricket Academy – you can sense the ‘but’ coming, can’t you? But they train on a Monday.

Picking myself up from this amazing yet rubbish news, I got the fixture started and then rued the day that all of our matches, both home and away,  seem to be on Mondays. Was it too late to shift to another day? Hmmm.

In the level doubles, Lucy Gallagher and Caroline Lightfoot had two excellent games against Val Bertenshaw, resplendent in pink, and Lisa Archer. Both games were neck and neck and involved some exhausting rallies. The Westholme ladies won the first to setting 25, 23, before also sneaking the second game to 19. On the adjacent court the cricketing protégé was on a mission with his partner, Alex Pimperton. Facing Mike Nicholson and Alex Hinton, the Westholme gents battled hard, winning both close games. In the second level games, Lucy, this time partnering Wendy Matthews, faced Kath Riley and Lisa. The first game was another neck and neck exchange. Lisa played some clever cross court drop shots, and the Westholme ladies were again pushed in to a setting situation: which they won 23,21. The second game, however, went to Goodshaw with Kath in particular showing her athleticism with some amazing retrieval shots at the net. We then welcomed our latest signing from the demise of St Matthews as Hefyn Parry played his first fixture for Westholme. Partnering young Harry, Hefyn faced captain Nigel Holt and his partner, Alex, who proved worthy opposition. The rallies were long and competitively played, with Nigel’s signature cross court back hand drive used to good effect. Despite a resilient performance, the Goodshaw men won both games, bringing the match to 5,3 in Westholme’s favour.

As we nibbled nervously on the homemade ginger cookies (not on a par with the renowned cakes of Ye Olde Grimshaw Street days courtesy of Phil and his mum – yes, I’m that old!) we realised it really was all to play for.

At top mixed, Alex and Caroline, still finding their feet as a partnership, competed well against their opposite number of Val and Mike, before succumbing in both games. Likewise, the newly formed partnership of Hefyn and Wendy, this time playing Kath and Nigel, gave their opposition plenty to work for. As we ran out of shuttles (I brought a tube and a half, honest!) the ever smiling Nigel pulled out a spare tube from his bag, along with plasters for his partner, Kath, who had cut her finger on a feather and was turning them red bit by bit! It was not until the number 3 mixed that the man on a mission, AKA Harry, playing with Lucy, that Westholme picked up their first mixed games, winning both against Lisa and Alex.

As the last two games went on court we knew, courtesy of Mandy Singh, that we needed two more games and then it would all come down to points. The ginger cookies had all but gone: we resorted to nail-biting instead!

After what could have been an ‘in one ear, out the other’ tactical talk from her partner, Caroline and Alex walked on to face the ebullient Goodshaw captain, Nigel, and Lisa. Whatever Alex said I intend to bottle it as the Westholme pair won both of their games to 17 and 18. Hefyn and Wendy ended the night against Val and Mike, with both games going to the opposition, meaning the match was drawn 9 games all. Both teams got the 4 bonus points for scoring over 300 aces – so 13, unlucky for some, points each – although Goodshaw won the fixture having 23 aces more. This was another night when I was relieved not to have the pressure of adding up the score sheet!

Remember that every Monday we have a practice at Westholme from 7:30 to 10pm on the spare courts. All are welcome to attend this practice for the princely sum of £2 #bargainbadminton. Why not use it to practise for the handicapped tournament coming up the week beginning 18th November? 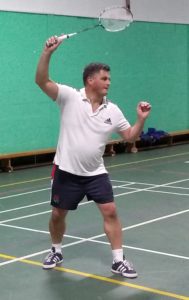 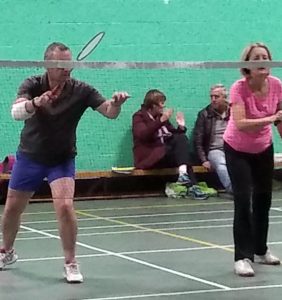 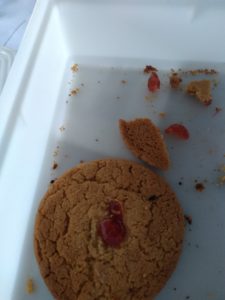